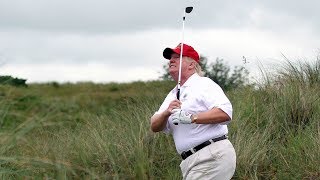 Enjoy these saucy one-star reviews of Mar-a-Lago. And when you’re done, feel free to add a review of your own if — and only if — you’ve actu

In just three months, his golf vacations have already cost more than 12 years' worth of Bill O&#

As a private citizen, Donald Trump continually criticized President Obama for golfing too much and wasting taxpayer money on unnecessary travel. (The impromptu trip to Texas to personally smother Antonin Scalia was probably the last straw.) Now a new analysis by the UK's The Independent has concluded that Trump has spent $24 million on vacations to his Mar-a-Lago resort in just the first 10 weeks of his presidency, which is approximately what Obama spent on getaways in his fi
Submit Another Reason